Here’s the first known recorded usage of the word “hacker” in the tech sense, published in 1963 in MIT’s The Tech newspaper: 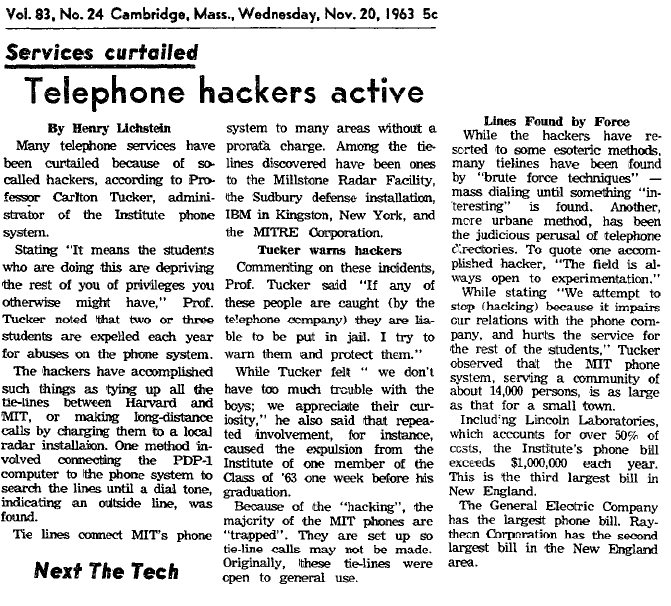 It was tracked down by Fred Shapiro, editor of The Yale Dictionary Of Quotations and author of a paper with a most hilarious and offensive name. The MIT article dispels the common notion that “hacker” was a purely white-hat term later corrupted by the media. The black-hat connotation was there early on; Richard Stallman was 10 years old when this was printed.

Most of what the article describes is now known as phone phreaking, though some sounds like war dialing. It is fascinating this was taking place in 63, over four decades ago! The international phreaking scene was still strong through the late 90s, abusing home country direct lines with software like BlueBEEP (“when freedom is outlawed, only outlaws will be free”), plus cell phone cloning and whatnot. That’s nearly 40 years of phreaking, though phone companies have since managed to stop widespread fraud.

The white-hat definitions are popular among geeks, but I’m not so sure about the deprecation. For one thing, cracker has a precise and also popular meaning: one who removes copyright protection from software. Meanwhile, blackhats aren’t exactly rolling over to surrender their language either. From the latest Phrack issue:

So no, I wasn't that kid that used to hang out at Radio Shack pulling apart electronic equipment and reassembling it to "see how it works." (...) that doesn't make you a "hacker" - it makes you a wannabe EE undergrad. (...) Hacking boxes makes you a "hacker" ! That's right! Write your local representatives at Wikipedia / urbandictionary / OED and let them know that hackers are people that gain unauthorized access/privileges to computerized systems!

The whole thing would offend most people, so no link. It's readily googable but be careful about browser exploits, you never know. As a neutral party, Wikipedia has sensible guidelines when it comes to controversial names:

A city, country, people or person, by contrast, is a self-identifying entity: it has a preferred name for itself. The city formerly called Danzig now calls itself Gdansk; the man formerly known as Cassius Clay now calls himself Muhammad Ali. These names are not simply arbitrary terms but are key statements of an entity’s own identity. This should always be borne in mind when dealing with controversies involving self-identifying names. (…)

A number of objective criteria can be used to determine common or self-identifying usage: Is the name in common usage in English? (…) Is it the name used by the subject to describe itself or themselves?

These criteria apply squarely to both types of “hackers.” Common usage? Check. Used to describe themselves? Definitely. The word is now hopelessly ambiguous, as it seems to have been from the start, puzzling outsiders. But it’s always clear to hackers.